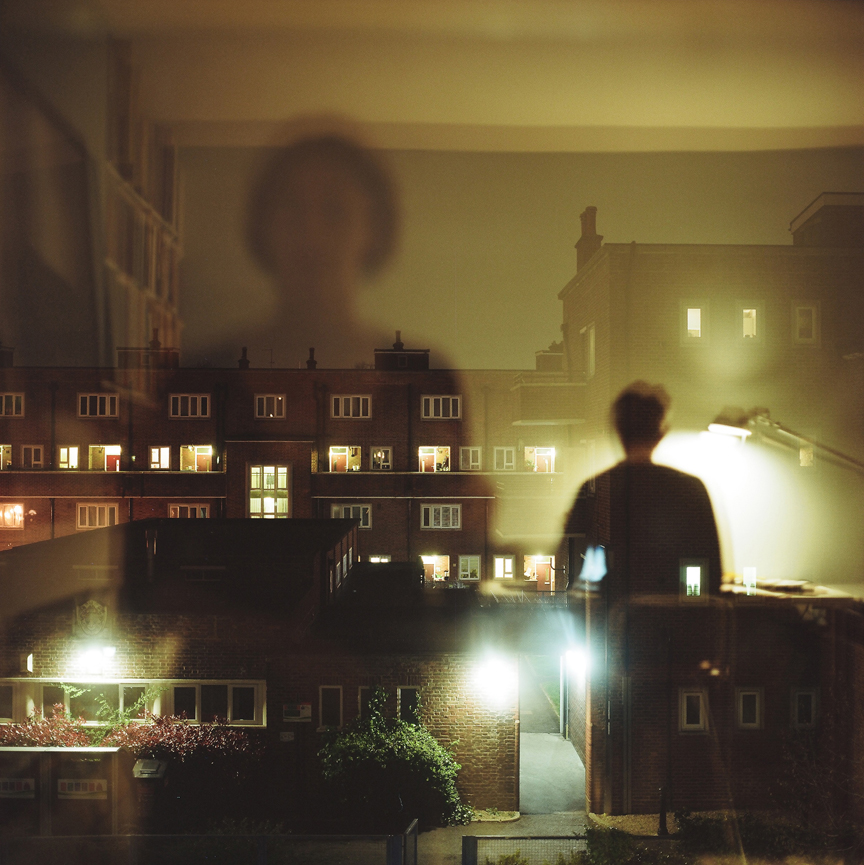 Lydia Goldblatt considers themes of origins, transience and emotional experience. Her quietly powerful and beautifully crafted prints creatively fuse the approaches of both documentary and constructed photography. Tenderly observed portraits and details of the human form are combined with enigmatic still lifes and abstract constructions suggestive of elemental forces. Her work for this commission entitled Fugue, made during and post lockdown, focuses on the family, private and close public spaces and intimacy as she looks at questions of mothering, community, love, loss and time. The work is made in the family home, the community of nearby streets and shot on film. The work shown is an extract from a larger body of work.

A week before lockdown we scattered my mother’s ashes. These pictures begin Fugue, prefacing a body of work in which mothering runs as a central theme. Before my children were born, I made Instar (2016), a project that explored transitional states and creativity, both natural and man-made. A private sub-text to this was the possibility, the hope, that I would become a mother. Before that, I made Still Here (2012), about, primarily, my parents’ ageing and my father’s death.

In the 3 years since my children were born, I have not made a creative response to the metamorphoses occasioned by their arrival. Ideas, words, notes have been written down, a few pictures made, but somehow it was so much that it was too much.

This year the entire world experienced a monumental metamorphosis. We have radically changed our ways of living. We have all borne witness to this change, reflected upon it, documented it. We have lived in our personal spheres, each small world becoming something bigger, a bit like the immersion of new motherhood.

In making work about this time, I draw on my own small sphere, a radius of about 50 metres, 4 people, and a handful of streets. I am incredibly privileged to be able to do so. My home and my camera have both offered places of refuge and safety. The uncertainty and anxiety of Covid, the staggering loss it has brought, are set against the personal grief of losing my mother, coming to terms with being a mother myself, and the struggle to understand what that means.

The pictures in Fugue meander, moving back and forth through the universal signs of routine, love and care that bear witness to family life. Chronological time, normally linear and clear, is suspended. It merges with emotional duration, more scattered, circular in nature. The work mirrors the non-linear evergreen of a three year old’s consciousness, present in every tense.

Intimacy and distance are key. Photographs made at home are offset with photographs made outside at night, tapping into the dissonance between domestic tranquillity and a sense of invisible unease. Confronted with so much that is explicitly out of bounds – people, touch, movement, the ‘normality’ of everyday life – another, more shrouded exile, is exposed. In such close, sometimes blissful, sometimes painful proximity to my children, I am aware of all that remains unknown between us. We are fused and separate, present and absent, elusive. I work on film, so the process too is blind and unknown – like the context, an invisible virus, marked by inaccessibility and intangibility.

The longing to be part of other lives, when physical touch has been forbidden, serves as catalyst, so that the act of photographing outside provides moments of connection. The perfect spring blossoms, the windows, the empty playgrounds articulate a psychological suspension in which both joy and fear oscillate. Photography’s ability to hold what is significant – darkness and light, void and presence – weaves kinship through the enforced distance.

Lydia Goldblatt considers themes of origins, transience and emotional experience through a lyrical harnessing of photography’s primary characteristics of light, time and surface. Her quietly powerful and beautifully crafted prints creatively fuse the approaches of both documentary and constructed photography. Tenderly observed portraits and details of the human form are combined with enigmatic still lifes and abstract constructions suggestive of elemental forces. Together, the images examine the impulse for existence paralleled with the act of artistic creation. While complete in themselves, each photograph can be understood as part of a larger whole: an absorbing puzzle reflecting upon the capacity of photography as poetic expression and simultaneously exploring emblems of the cycle of life.

Goldblatt’s series Still Here was published as an artist monograph by Hatje Cantz, and is held in the collection of the Victoria and Albert Museum National Art Library. Her work has been exhibited internationally, including at the Felix Nussbaum Museum, Germany, Somerset House, London, the GoEun Museum of Photography, South Korea and the National Museum, Gdansk. She was awarded the Grand Prix at 2014’s Tokyo International Photography Festival, and in 2016 undertook a year’s artist residency at the Florence Trust in London, where she developed her series Instar.