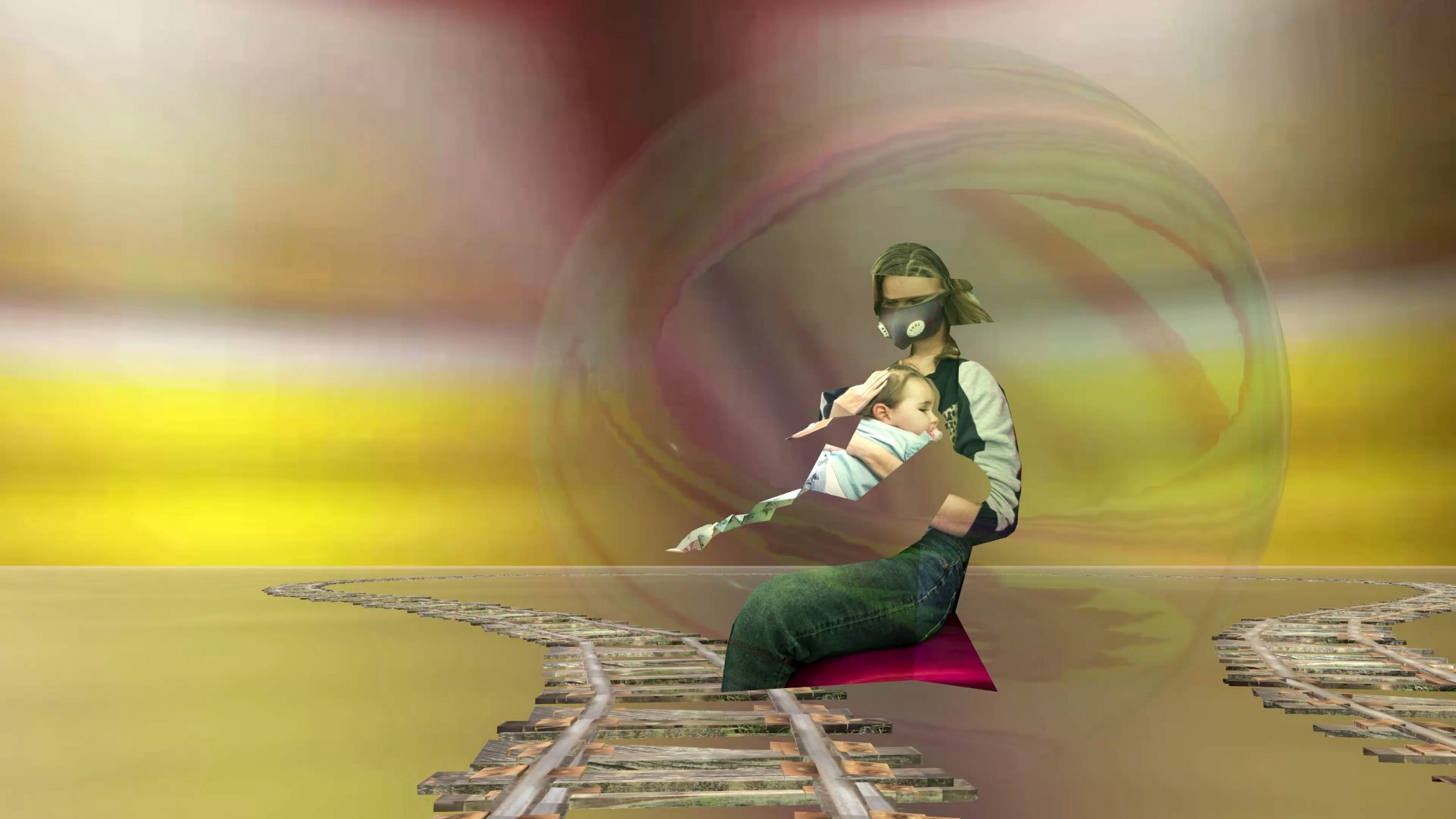 Andrea G Artz is an artist that pushes the boundaries of photography into sculptural forms and moving image. Her commissioned work focusses on travel after Covid, those who need to travel by public transport for their work and families, and the situations they find themselves in emotionally and environmentally as they attempt to travel safely.  Andrea makes sculptural forms from her photographs of people, collects audio and uses sound and animation to invite the viewer to understand the photographic image in a contemporary setting such as virtual realities.

Pandemia to Pandemia is a surreal journey that reflects on the trauma of modern transitory life and how travel has changed during Covid 19. Actual travellers were photographed and interviewed at different moments during the Covid epidemic and in short audio statements reflect about their feelings during travel.

All travellers are safely enclosed in giant colourful bubbles. They are taken by the velocity of speed; they come and go and ride in an endless loupe just like a toy train does. Bubbles collide, and strangers meet each other for a moment before they move on.

The word “bubble” has gained a new connotation during Covid times, but more so I was inspired by a seaside fun fair where people were wheeling in giant bubbles like hamsters. I was suddenly overcome by the fearful vision that the fun seekers got blown out into the dangerous open sea.

Travelling signifies the freedom to experience other cultures, gain enlightenment & overcome fears. At this moment in history people are afraid of being close to others or/and get infected, but also afraid to lose the freedom to roam freely in this world.

Throughout the years, I have photographed people caught on mass transit during significant historical time: Russians riding the escalator after Perestroika (Metropoliten, 1993), New Yorkers travelling the Staten Island ferry shortly after 9/11 (Passengers, 2001), and commuters glued to their electronic devices in our digital world (In Transit, 2015).

Finally, when the journey is over and all travellers have gathered, they suddenly in a precisely synchronized move disperse, tumble & vanish into all directions and the far distance. An unknow ending and “really shocking for not saying anything precise about their vanishing”.

The project is animated with the gaming software Unity and can be experienced as a virtual reality experience using Oculus Rift. The digital models of the travellers are created in Blender and are originally based on cut- out photographic prints playfully folded into three – dimensional sculptures that exaggerate the physique and posture of the characters. A virtual reality experience with more immersive and interactive features is in the making.

Andrea G Artz has an MFA from the University of Leeds and is based in London. She is best known for her large-scale sculptural installations for galleries, museums and residencies. She has won various international awards including Arts Council England Lottery Funding for her virtual reality project Ghost Weight Experience, the Mac Dowell Fellowship & residency,  the European Centre for Creative Economy (ECCE) grant and the Fuji Euro Press Award.  Recent exhibitions include School of Design/University of Leeds, Royal Academy of Arts, Towner Eastbourne, Charles Dickens Museum, APT Gallery, Kunsthaus Hamburg, Palais des Art Marseille. An upcoming (postponed) solo show will take place at Coleman Project Space  in 2021.

Much of her work is on the theme of travel. Travelling signifies the freedom to experience other cultures, gain enlightenment and overcome fears. She has previously photographed people caught on mass transit during significant historical times: Russians riding the escalator after Perestroika (Metropoliten, 1993), New Yorkers travelling the Staten Island ferry shortly after 9/11 (Passengers, 2001), and commuters glued to their electronic devices in our digital world (In Transit, 2015).