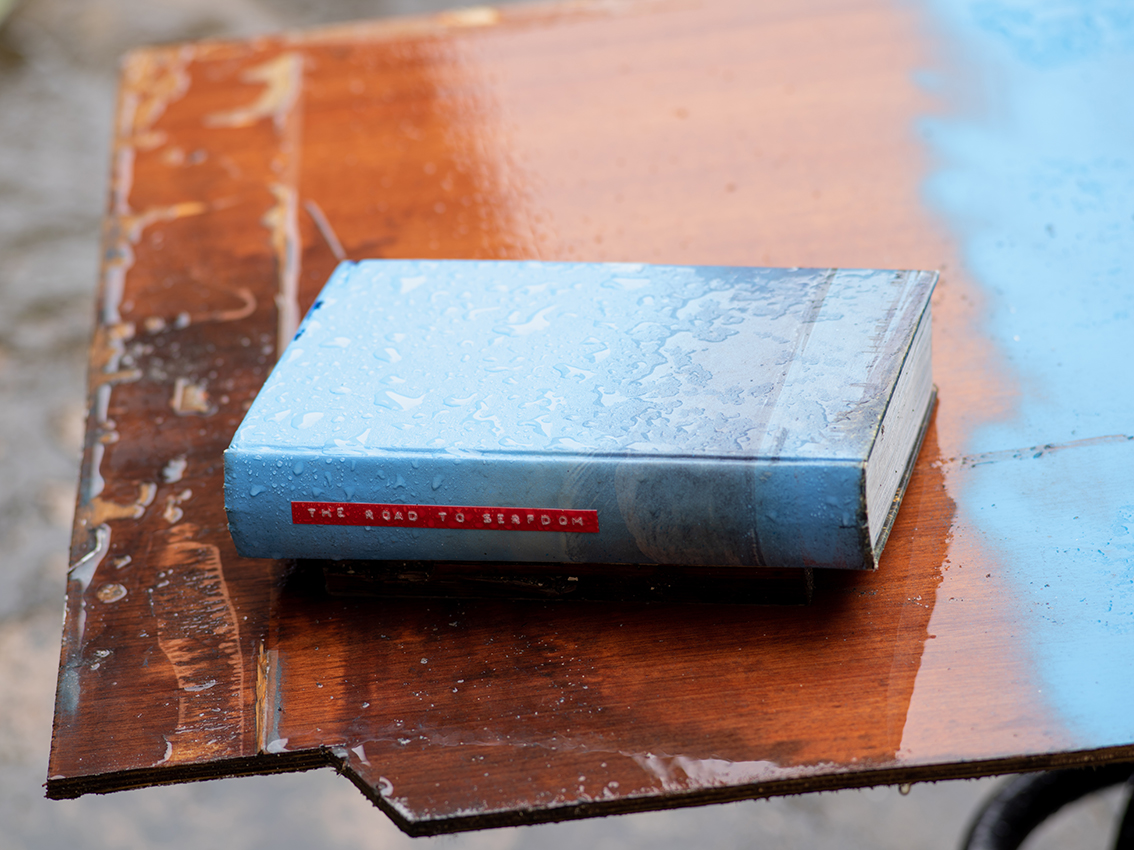 Freddy Griffiths is an artist working with and around photography, using the photographic image to further non-hierarchical methodologies in contemporary art and everyday scenarios. His ongoing exploration has resulted in the formation of a photographic archive. For this opportunity Freddy made a short film using still images from his archive. The film deals with the economic fallout of Covid-19, focussing on perceived notions of a populous ‘addicted to furlough’, as coined by a leak from Whitehall to The Times.

A Slippery Slope
by Freddy Griffiths

This film is an exploration of what it means to be ‘at work’. Specifically, what we consider to be gainful employment, versus work in service of our own personal endeavours. This dichotomy has been sharply thrown into focus during the Coronavirus pandemic. The Coronavirus Job Retention Scheme has resulted in many employees being furloughed from their jobs. This previously unimaginable reality has produced diverse responses across the political spectrum. The idea of workers being paid to stay at home and ‘do nothing’ causes particular consternation in sections of the right-wing press.

Almost predictably in May of 2020 during the UK wide lockdown, anonymous government sources floated the concept of a public ‘addicted to furlough’. Although these statements were publicly refuted by the Chancellor Rishi Sunak, it did fuel a sense that workers should feel tacitly guilty about their furloughed status.

The narrative presented throughout this film contains a multiplicity of realities. It is based on interviews conducted with furloughed workers during the summer of 2020. Many are rightly worried that they will be made redundant when the scheme ends on October 31st. A few were actively concerned that speaking to me would affect their future prospects of continued employment.

I should also add, that of all those I interviewed, I was struck by their desire to be involved in constructive work of some kind during their time spent on furlough. Whether that involved self-directed study or simply self-care manifested through the completion of a creative task. Almost nobody described hours on the sofa, at least not out of choice. Many sought out creativity often lacking during their day to day employment, but also experienced a subtle anxiety during lockdown difficult to fully throw off.

Our narrator makes reference to ‘that big photographic art project’, which presumably he has been working on in the recent past. But then remarks that during his time on furlough: ‘I found myself increasingly unable to think creatively about almost anything’. Perhaps we are giving to much credence too the most mundane of factors within the equation of creativity? Possessing free time alone isn’t enough.

With these factors in mind I invite you to consider the voice you hear throughout this film as representative of a plurality of experience. But also, a voice that provides anonymity to those that I have spoken to.

Today my employer called to inform me that I wouldn’t be needed at work for the coming months. Apparently due to the Coronavirus pandemic it was possible for me to stay at home and for the UK government to pay my salary.

Whilst I expected to be possibly made redundant sometime in the future, I didn’t expect that the government would offer any financial support to workers such as myself. I’d been led to believe that the Conservative party was ideologically opposed to this type of assistance, believing it to be a slippery slope toward further state intervention.

I feel safe in telling you that I found my job manifestly miserable almost entirely. I’d managed to cultivate a thin vale of pleasantness at work, mainly so as to save my colleagues from being subjected to my frequent bouts of nihilistic bleakness.

I’ve survived the last few years by consistently feigning busyness, combined with hours of essentially hiding from my colleagues. Luckily the labyrinthine layout of my workplace has secured the success of this strategy. There are a number of remote desks where I can work on my personal endeavours in peace.

I always make sure that I compete a small number of tasks and present them with great fanfare so as to demonstrate my competency amongst my colleagues. I pride myself on managing to avoid taking on any extra duties despite my reputation as a diligent worker.

I’ve been wondering if my recent furloughing represents an end to my finely constructed existence at work.

I live in a small bedsit flat with no outdoor space. Although, since February of this year I’ve had access to an allotment not far from my flat. As far as I can tell I’m permitted to tend to the allotment during lockdown. I spent an hour reading the guidelines on gov.co.uk but couldn’t really come up with a definitive answer.

I began to substitute wage labour for rigorous toil in the service of weed removal. I hoped it might be possible to cultivate a reliable food source from the allotment and also banish thoughts of my latent employment to the far reaches of my mind.

My ultimate aim was to avoid returning work at all. To make this happen, I would need a source of food.

I am however an inexperienced gardener.

After a few weeks I started to get regular phone calls from my employer. I tried to answer these calls as infrequently as possible. Although I did deduce that not all the company’s employees were furloughed. In fact, it seemed as though my job was being completed by one of my colleagues.

Throughout my incessant weeding I frequently unearthed buried objects. I began to arrange these around the allotment. I wondered if these objects might have been used as an alternative fertilizer by a previous resident.

One day a friend telephoned and remarked that my being furloughed was a “wonderful opportunity to finally get on and finish that big photographic art project you’ve been working on”.

Whilst I didn’t necessarily disagree with this sentiment, I found myself increasingly unable to think creatively about almost anything. Indeed, the only activity that could with any reliability distract from the bleakness of my flat was weeding at the allotment.

I unearthed increasing quantities of mainly photographic ephemera from the ground of the allotment. I arranged these items haphazardly around the allotment and subsequently my flat.

I saw hardly any relationship between these found objects.

On the 1st of September my employed called and informed me that I would be made redundant in one month’s time. I was told that “the market was looking increasingly dire for our industry”.

I used the remaining days of my furlough to catalogue these objects together with the progress of the growing seeds. Luckily a few days previously I had unearthed a fairly modern camera in a particularly brambled corner of the allotment.

My employer called again towards the end of October. I was offered a few days freelance work essentially performing the tasks from my old job.

I was advised that the tasks required of me could be done “working from home”. This sounded agreeable to me, so I set up a workstation in another corner of the allotment.

Since these freelance hours would not be sufficient to pay my rent, I gave notice on my flat.

I began construction of a shed on the allotment that I thought would provide ample shelter. It would have the added benefit of a small window, allowing me to observe the progress of my seeds more consistently in the future.

I’ve felt a certain relief at seeing the first seedlings poking through the soil. It’s taken my mind off a growing sense of guiltiness on my part.

Although I know that my guilt is somewhat manufactured by my sadistic interest in the right-wing print media. I can’t help but wonder if people are judging me when I exchange fleeting eye contact with passing drivers on my daily walk to the allotment.

Freddy Griffiths is an artist based in Nottingham. He works with and around photography, using the photographic image to further non-hierarchical methodologies in contemporary art and everyday scenarios. His ongoing exploration has resulted in the formation of a photographic archive.

Recent international investigations in the last two years have centred around questions of photographic materiality and the finite nature of natural resources. Walking or cycling as a primary mode of transport has defined the making of photographs during these excursions. Griffiths is keen to embrace contradictory and ambiguous ways of working for future presentations of his archive. Democratising the editing process through audience participation is something of particular concern currently.