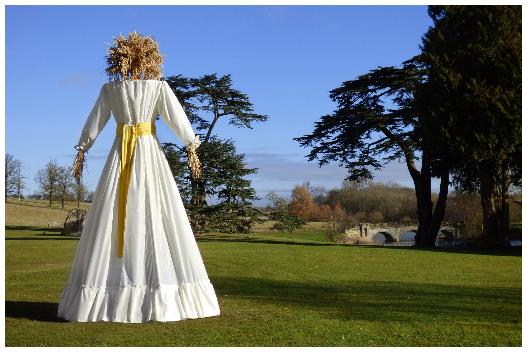 Kern Baby, A Child For Sacrifice

The giant corn dolly Kern Baby is a five meter-high (15 foot) sculpture, now exhibited at the Library of Birmingham, made as a version of a harvest figure photographed in 1902 by Sir Benjamin Stone. The sculpture was created by artist Faye Claridge, who uses archives, folklore and reminiscence to examine our past relationships and our current sense of national and personal identity.

Claridge was commissioned by GRAIN, initially through a Turning Point West Midlands residency, and has worked extensively with the Library of Birmingham’s Benjamin Stone Collection, an archive of over 22,000 prints amassed by the MP and self-taught photographer who lived from 1838 to 1914.

In addition to the sculpture, which stood in the grounds at Compton Verney, Warwickshire, throughout 2015, Claridge also made a series of photographs, A Child For Sacrifice, based on Stone’s imagery. Inspired by his photographs she worked with young people from a Warwickshire village to re-interpret customs using artefacts from the Marton Museum of Country Bygones.

Stone’s obsession was to “record history with the camera” for future generations and Claridge questions how we can approach such an ambition today. Her work asks how our sense of self, geography, community and time can be formed through the celebration of repeated and adapted customs.

Stone photographed the Kern Baby in Whalton, Northumberland, and Claridge is currently working on plans for a ‘homecoming’ film, following the giant sculpture’s journey from the Birmingham archives to the North East.

The Benjamin Stone Collection can be accessed via appointment at the Wolfson Centre for Archival Research on floor 4.

The Marton Museum of Country Bygones is open at weekends during the summer or by appointment via museummarton@gmail.com.

The exhibition is a partnership between GRAIN, Library of Birmingham and Compton Verney, supported by Arts Council England.