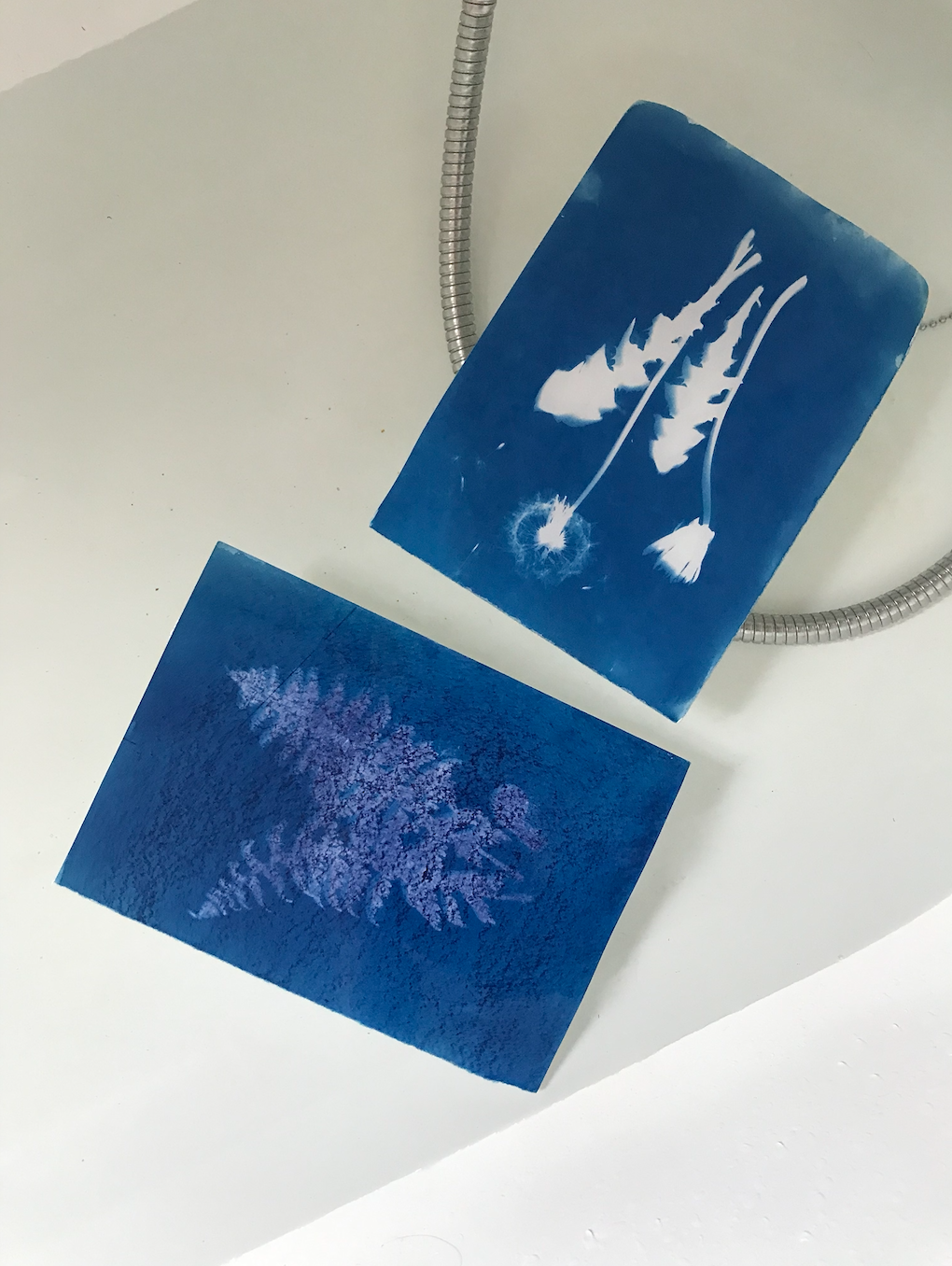 For this writing commission, Anna Souter produced a new piece of creative fiction which explores the relationship between light and dark in photography and the lives of plants. It follows a photographer who turns to her garden for inspiration during quarantine.

Ayra wakes to another day of shielding. It’s hot even though it’s still early. She gets up to pour herself a glass of water and the morning sunlight gleams on the dirty glass. She talks to herself as she puts in her contact lenses. She’s not sure why she doesn’t just wear her glasses when there’s no one there to see her.

Here we go again, she says.

Her reflection stares back at her, its shadowed contours made unfamiliar by the harsh shaving light above the mirror. There are no windows in the bathroom, so she’s turned it into a makeshift darkroom, swapping out the old yellow lightbulb for a red one. There’s a roll of masking tape on top of the toilet cistern for sealing the door later. She takes one small white pill from the packet under the sink. The foil is labelled with the days of the week, an edible diary.

She walks through the living room and picks up her camera from the sofa, where she left it yesterday. She thinks she should take better care of her things. It’s a thought she often has, but only after she’s acted negligently. She worries about this. The camera is black with an expensive leather strap. The camera was expensive too, like the film she uses, which she is sometimes afraid of wasting.

She goes outside into the small garden. She has been spending a lot of time out here recently. She doesn’t know much about gardening, but the neglected borders are full of plants. She isn’t sure what they are, but she suspects most gardeners would call them weeds. She lets them grow. She knows the adage about a weed being a plant out of place.

Spring came in a rush this year. When she began shielding, the borders were almost bare. She has been photographing their progression from bare soil to green flourishing.

There is slight dip in the lawn in front of the flowerbed and her body fits perfectly into the low groove. The grass is a little longer here and a different texture – thicker, with a slightly waxy surface. It prickles her stomach when she lies down on it, but it’s not uncomfortable. She presses her elbows into the grass to find the two small indentations her body has made over the last few weeks. With her elbows positioned and the camera held up to her raised face, she can keep the lens in almost exactly the same spot every time. She watches the plants through the viewfinder. There is a breeze this morning making them sway, and she is waiting for a still moment. Some days this takes a long time. She doesn’t mind. It’s not like she’s going anywhere.

There are at least twenty different species in front of her, almost certainly more. She recognises dandelions – flat leaves hugging the ground in a star formation, a bright yellow close-petalled flower rising on a stiff stem. She knows cow parsley, too – clouds of white flowers on tough stalks grown so tall they no longer fit within the frame of her shot. And the daisies – little white and pink-tinged petals around a yellow nub.

The breeze is dropping now, so Ayra adjusts the aperture and shutter speed in preparation, focusing on a strange woody-stemmed plant in the middle which she hasn’t noticed before. It has somehow grown clear of the delicate plants around it without attracting her attention. She tells herself to stay tripod-still and locks her elbows. She presses the shutter and the tiny backyard ecosystem imprints itself onto the light sensitive film and an image bursts into being. The film whirrs as it is wound back into its casing.

Being alone is hard, actually. But it’s also kind of freeing.

All around, the plants grow and light turned to sugar writes patterns of green against the dark soil.

At lunchtime she translates a document about health insurance for a client in Dubai. She doesn’t know a lot of the words and has to look them up in Google Translate. She suspects the company is a bit dodgy, but she resists the urge to investigate. They pay isn’t bad and she needs the money now the rest of her freelance work has dried up.

The trackpad of her laptop feels hot under the tips of her fingers.

In the afternoon she logs off and goes into the bathroom, where she has been storing sheets of cyanotype paper in the medicine cabinet. She made the chemical solution a few days ago, holding glass beakers from her childhood chemistry set up to the red bathroom light to check the measurements. She hung the coated paper up on a washing line above the bath to dry.

Now she checks her pack of pills and remembers she’s already taken one today. She puts a sheet of paper in a wooden box and takes it out into the garden. The cherry tree grows imperceptibly above her head as she drops to her knees and pulls a large dandelion out of the ground. She prises it slowly from the soil with her fingernails. The head has just gone to seed and a few thin downy sprigs float away. She opens the wooden box and arranges the stem, leaves, roots and seeds before squashing them flat with a piece of glass from an old picture frame. She thinks of Anna Atkins, imagines her in silhouette, a woman in crinoline skirts and pinned-up hair holding her bold blue pages up to the light.

Ayra leaves the cyanotype to develop and lies beside the wooden box on the lawn. She spreads her fingers and catches blades of grass between them. She feels sad and happy simultaneously when she does this, like something is repeatedly breaking up and settling again within her. She lies there for a long time and she imagines the grass growing around her, coming up through her hair and around her spread arms.

She is very aware of the opacity of her body.

She imagines herself disappearing, bleached into nothingness by the sun that greens the grass around her.

Later, she washes the dandelion print and hangs it up to dry. The paper has become an intense blue. The form of the plant is sharply delineated, except for the seed head which looks soft and ghostly as if it’s glowing from within. She’s pleased with it. She’ll make another tomorrow.

There’s something comforting in repetitive tasks.

She’s finding it hard to sleep at the moment, even though she’s often tired during the day. In the early hours of the morning she decides to start developing the film from her camera in the disorienting red light of the bathroom. It’s dark outside, but she still uses the masking tape to seal the edges of the door.

She pulls the cord on the extractor fan and it makes an unexpectedly loud whirring noise she’s never noticed during the day. The night gives her vision a different clarity, as if she’s tried to sharpen up a grainy photograph. She’s aware, somehow, that there’s a new moon tonight and somewhere above her the skies are bright with stars.

She wonders whether there is grass in her hair and thinks she’d like to have a shower or better still to stand outside in the rain. But it’s not raining and the bath is still hung with drying cyanotypes. This is a downside of using the bathroom as a darkroom.

She’s already prepared the chemicals, so she begins the process of putting the film in the tank, adding developer and agitating it. It requires intense concentration, even though she’s done it many times before. An ongoing meditation on darkness and light.

She imagines herself disappearing again, not bleached by the sun but absorbed by the rushing dark of the night and the absent moon. Her physical identity seeping into the film turning in the tank she has balanced on the closed seat of the toilet, draining her dry.

And inside the dark liquidity, an ecosystem emerges into view like a seed that puts out a tentative root into the shadowy soil, germinating with quiet magic.

When the process is over and the images are fixed and rinsed and she has clipped the finished series of tiny images to the washing line above the bath, she suddenly feels overwhelmed by fatigue. She pours the used chemicals down the sink and turns off the red light, before lying down on the bathmat and falling asleep with her head by the under-sink cupboard.

It’s late when she wakes the next morning, and the weather has broken. She peels the masking tape from the door and rolls it into a sticky ball. Outside, water drips from the leaves and a solitary bumble bee flies slowly round the garden searching for shelter.

Ayra puts another roll of film in the camera and goes out through the living room. She settles herself in her dip in the lawn and feels the rain immediately soak through her t-shirt and jeans to her skin. She digs her elbows into the soft ground and raises the camera to her face.

She takes a photograph of the glistening border, which looks impossibly beautiful in the damp light.

Then she turns the camera round so that she can see her own reflection in the lens.

She presses the shutter.

Anna Souter is an independent writer, researcher and curator based in London. She is interested in the intersections between contemporary art and ecology, and has published criticism, essays and fiction. Anna’s texts draw on tropes from academia, memoir, poetry and science writing, and are often inspired by encounters or collaborations with human and nonhuman others. She has also worked as a curator on exhibitions about rewilding and urban encounters with nature.