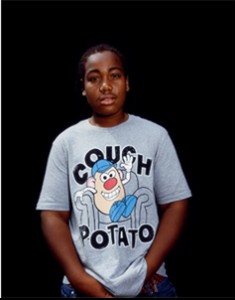 On the thirtieth anniversary of the term ‘urban tribe’ (Michel Maffesoli, 1985), internationally renowned Artist and Photographer, Trevor Appleson premieres his new exhibition at mac entitled: Birmingham, which opens on Saturday 2 May to Sunday 5 July. Appleson’s classic portrait photographs of carefully selected demographic groups made in makeshift traveling studios around the world are now well known. For his new body of work, Appleson has taken to the streets once again with a focus on youth culture in Birmingham. With over 70 images displayed from over 500 taken over a year outside local pubs, clubs, informal spaces and organisations, Appleson reflects the infinite styles and tribal affinities of young people in the UK’s second city.

Reflecting the cultural diversity of Birmingham and its status as the youngest city in Europe – 53% of its population under the age of 35, and 39% under the age of 25, and an upcoming national election that may beckon in a new government, Appleson’s exhibition captures a snapshot of young people within a time and place. His portraits, presented as installations alongside personal objects and social media content, collected from the archives of his subjects, explores self-representation in an ever changing world, as a counterpoint to the conventions of the traditional photographic portrait. Each individual layer offers a window into their private lives – made public by the plethora of new media, revealing their thoughts, fears and aspirations.

Appleson said: ‘Birmingham echoes the diversity of multicultural Britain and the birth of British subcultures in working class neighbourhoods, I am interested in examining how inner city diversity influences young people across cultural divides in local communities and how that representation manifests itself through style and fashion. Birmingham will go some way to addressing this fascinating subject, while at the same time offering a lasting legacy for future generations.’

The exhibition will also incorporate a symposium: The Cult of the Photographer and Culture of Social Media on Saturday 20 June, 11am to 4pm (on sale Friday 13 March). Led by Film and Video Umbrella, this event continues from the recent ‘First Person Plural’ at The Media Space.

Birmingham has been commissioned by mac birmingham and the Library of Birmingham, with support from Arts Council England, Drake’s London, the Saintbury Trust, the Stanley Picker Trust, Film and Video Umbrella and the University of Birmingham.

The Library of Birmingham will acquire works from the collection and thereby provide a permanent legacy for Appleson’s work in Birmingham.