The Aura of Boxing: The Black and White series – Max Kandhola

The Aura of Boxing: The Black and White series – Max Kandhola 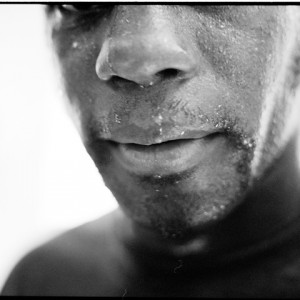 Max Kandhola has been documenting boxers and their environment since 1996. This multi-site exhibition* marks the conclusion of the project and the launch of a new major publication on Max’s practice by Dewi Lewis Publishing. The essence of the narrative within the collection is based around three British boxers, Howard Clarke, Julius Francis and Robert McCracken, each providing a different context to the story of boxing. For this exhibition, Max has photographed Nottingham born and three time world champion boxer, Carl Froch.

The Aura of Boxing encapsulates Max’s ability to research through the act of photography, using his camera as a means to explore and unveil the depths of life. In this collection the explicit representation of the traditional ‘fight’ is avoided; instead Max explores conflicts within the fighter. Kandhola focuses on the ring and the gym as spaces for preparation and meditation in an attempt to capture the boxers’ aura in these moments of psychological intensity; the moments shortly before entering the ring and after leaving it, during which the boxer truly is vulnerable and yet often unnoticed.

Using boxing as a metaphor, Kandhola’s research reflects upon the psychological gesture of performance in the sport, and the ritual of the individual boxers. In addition, the work documents the attempted flight from inner-city poverty that is common to many young boxers. Exploring how these athletes have been cocooned by the social pressures of the inner-city, Kandhola’s work reveals the impact and presence of mind that manifests within this urban landscape, reflecting the politics of class and clan.

*Aura of Boxing will be launched at three venues in 2014. In addition to this show at New Art Exchange, two other distinct exhibitions will be presented at Rich Mix, London from March 6th – 30th March and Quad’s Chocolate Factory 8th March – 18th Apri. The research and development of Aura of Boxing has been made possible with generous support from Nottingham Trent University.