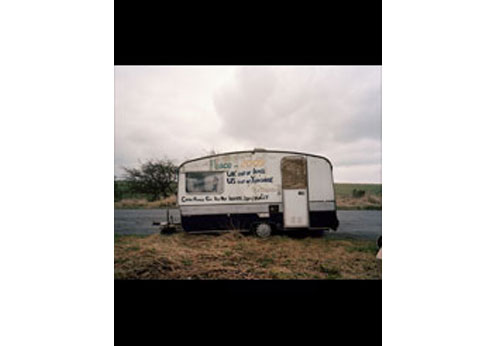 Stuart Griffiths began taking photographs when he was a young soldier, carrying a ‘sure-shot’ instamatic camera in his chest webbing alongside 120 live bullets, water canisters and field dressings, whilst on patrol in West Belfast in the late 1980s. Closer is Griffiths’ first solo exhibition and, curated by Val Williams, was launched at the
Brighton Photo Fringe Biennial in 2010.

Between 2003 and 2008, Griffiths photographed socially excluded veterans who were living in hostels, treatments centres, or were homeless. With their military careers behind them, these veterans, many of who had been seriously injured, face innumerable problems and show remarkable resilience. The making of these photographs, and Griffiths’ own reflections on his life as a photographer are documented in Isolation, the 2009 documentary film made by Luke Seomore and Joseph Bull, which will be shown at mac birminghamduring the exhibition.

Acting as a counterpoint to these large-scale photographs, are Griffith’s candid photographs of army life, taken during his time in the Parachute Regiment in Northern Ireland in the late 1980s and early 1990s.Documenting the minutia of service life, these photographs are both bleak and bizarre. Griffiths’ remarkable letters home, which were often highly illustrated, are also being presented for this installation.

Exhibition curated by Val Williams with support from London College of Communications and the Photography Archive Research Centre.