We Still Stand consists of three discrete photographic series, each made during the 25th anniversary of the 1984-85 Miners’ Strike. Instead of defining moments of strike action and conflict, these photographs demand a different kind of emotional and political response to those taken during the strike. They speak not solely to an individual and specific moment of crisis, but to issues which stand outside that time. Revisiting locations where major political events took place, Lovell’s images remind us of life’s losses; the loss of an industry, the passing of an era and the departure of communities built on coal. 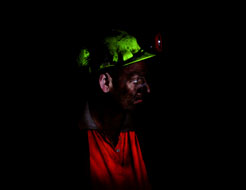