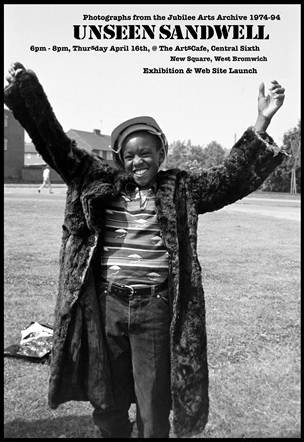 In 1974, in West Bromwich, a group of young graduates founded Jubilee Theatre and Community Arts Company. Over the next 20 years they raised over 2 million pounds for local arts and community activity, working with 850 different groups, reaching over 200,000 people. The remarkable documentation of their work consists of some 20,000 black & white negatives and several thousand slide transparencies. Today, these images provide a remarkable record of local people and places, a valuable historical document of political, cultural and social change.

Led by Brendan Jackson and Beverley Harvey, artists have been working with Sandwell Heritage and Archives Service to preserve and share this important archive. In the spirit of the original arts group they returned to the original locations in the borough, working with groups to explore and select the material, collecting oral histories, personal snapshots and memorabilia.

The project has been developed by Laundry with the support of the Heritage Lottery Fund, the Arts Council, Sandwell M.B.C, Community Development Foundation.