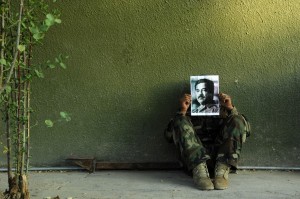 An exhibition of work by emerging artist Jamal Penjweny from Iraqi Kurdistan, including a number of photographic series that are as poignant and smart as they are formally straightforward. Saddam is Here consists of twelve images of Iraqi people in familiar surroundings, each holding a life-size picture of Saddam Hussein’s face in front of their own. Saddam’s likeness becomes a mask obscuring any expression of emotion, any gaze, or possibility of sure identification and individuality. It is ludicrous, hilarious and at the same time absolutely ominous, pointing up the insidious influence of a dictator.Another Life, a short film by Penjweny, follows some days in the lives of Iraqis smuggling alcohol from Iraq into Iran. It has the grainy appeal of covert cell phone footage, and is very matter-of-fact in its editing. There is no melodrama, but the last moments are like an emotional hammerblow when, instead of rolling credits, we find ourselves reading paragraphs explaining how two of the men just introduced to us were killed by customs police a few days after filming.

Saddam is Here is organised in collaboration with the Ruya Foundation for Contemporary Culture in Iraq.

This is the opening exhibition of Ikon 50, the year-long programme celebrating Ikon’s 50th anniversary.