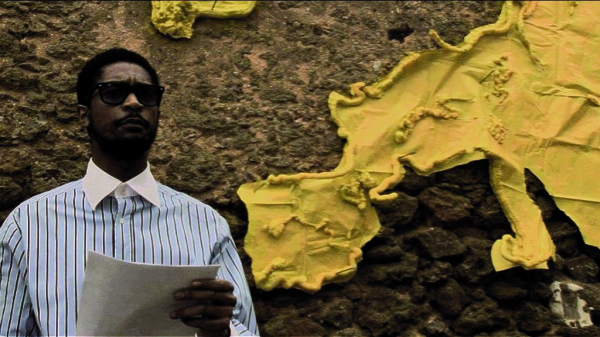 This is the first solo exhibition of work by Nástio Mosquito, emerging to be one of the most exciting artists of his generation.

Rooted in the broadcast industry, where Mosquito worked previously as director and cameraman, his artistic practice is extraordinary for its energy, intelligence and wit. It is as funny as it is confrontational, as candid as it is ironic, satirical and cool. It embraces film and music, theatrical performance, video and installation, often requiring the collaboration of others, most notably Spanish artist Vic Pereiró. Frequently appearing in concerts and music festivals, Mosquito has also performed within the context of visual arts programmes and maintains a lively online presence.

Theatrically, Mosquito takes centre stage in his work. He often assumes roles, through mimicry, in order to express ideas occurring to him, not so much as his own cherished beliefs but rather observations on human folly manifested in modern life. The distance between his actual identity and such characterisations enables him to express himself variously as being trangressive, cool, cynical, profane and vulgar. “Nástia”, a know-it-all with a Russian accent – a monster engendered by the Cold War – epitomises this tendency, and often makes an appearance. At the heart of the exhibition is Nástia’s Manifesto (2008), a circular projection suspended just above the floor, based on the keywords “Hypocritical, Ironic and Do Not Give a Fuck”.

In a variety of ways Mosquito is an artist pointing us towards a future in which clear distinctions are made between art forms, between popular culture and fine art, and the categorisation of cultural identities will have become either redundant or irrelevant. His self-awareness as someone in the art world sits alongside his concerns with African politics, especially those pertaining to Angola – as it deals with the legacy of a long and bloody civil war – sexual politics, rampant consumerism and other symptoms of globalisation.

The device of proclamation, of preaching or pedagogy, is deployed with ironic knowingness. In 3 Continents (2010) we encounter the kind of confidence that characterises the nouveau riche stumbling into situations they don’t really understand. Acts (2012), a more recent work by Nastivicious (Mosquito and Pereiró), is less narrative. In four parts, we see him in silhouette against backgrounds of vivid colours, performing covers of songs such as I Shot the Sheriffand Purple Rain, interspersed by exhortations in Portuguese. These are combined with electronic drones and digital effects to conjure up a vision that is as weirdly ominous as it is abstract.

Please note elements of this exhibition contain adult content and parental guidance is advised. The exhibition is accompanied by a publication, priced £10, with text by independent curator, writer and artist Gaby Ngcobo. Visit Ikon’s online shop for the full range of Ikon’s catalogues and limited editions.

Nástio Mosquito’s exhibition is supported by the Sindika Dokolo Foundation.