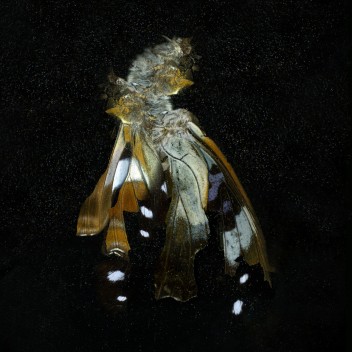 Born in Nottingham, Collishaw studied at Goldsmiths College of Art and took part in the FREEZE exhibition curated by Damien Hirst at Surrey Docks in London in 1988 exhibiting the now celebrated Bullet Hole.  He became known for brutal, confrontational and challenging work..  In the mid-90s he began manipulating photographs of lilies and amaryllis, transforming these blooms into flowers riddled with disease.  The effect was both alluring and repulsive.

This spring he will have his first major solo exhibition in Turkey at Arter and will return again to show at the Venice Biennale.

Collishaw’s monumental site-specific work, Magic Lantern, was commissioned by The Victoria & Albert Museum and was installed in the cupola above the entrance from November 2010 – April 2011.  Within a ten-metre diameter, this large-scale 3D zoetrope work depicted animated moths dancing around a flame, and celebrated the museum’s status as a beacon of culture, learning and knowledge which attracts people from around the globe.   Both Thames & Hudson and Other Criteria have published books about Collishaw’s art practice and Blain Southern have just published a major publication on his work.

Photographs from Mat Collishaw’s Insecticides series feature in The Nature of the Beast at The New Art Gallery Walsall from 26 April  – 30 June 2013.

The Library of Birmingham, GRAIN, The New Art Gallery Walsall and BIAD, Margaret St Birmingham  are delighted to welcome Mat Collishaw to talk in Birmingham.